A Third Torah from Sinai: Revising Our Myth for a New Jewish Era 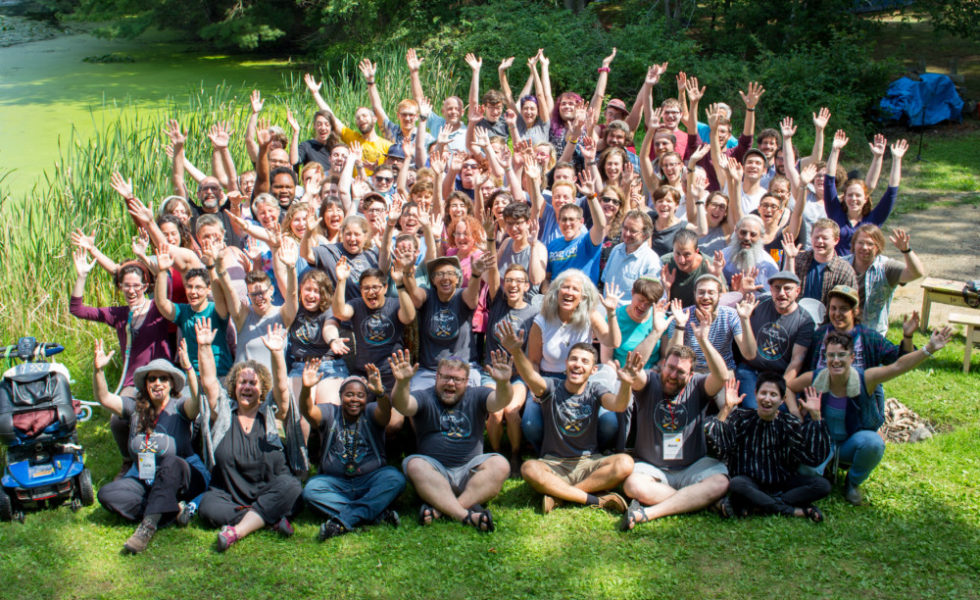 At the beginning of his book A Brief History of Time, Stephen Hawking shares the well-known story of the old woman who raises her hand at the end of a scientist’s lecture on astronomy to declare that the scientist’s theory that the sun sits at the center of the solar system and that the earth revolves around it is entirely wrong. “The Earth,” she says, “rests on the back of a giant turtle.” Attempting to demonstrate the problem with this theory, the scientist responds with the gentle challenge, “And what is the turtle standing on?” “That turtle is standing on a far bigger turtle,” the woman replies. “And what does that turtle stand on?” the scientist persists. It is at this point that the woman answers triumphantly, and famously, “It’s turtles all the way down!”

Myths are powerful. As Yuval Noah Harari explains in his book Sapiens, what distinguished Homo Sapiens from other human species, like Neanderthals, was their ability to think about things that didn’t actually exist—to think in fictions. And once they were able to do that, they could weave these fictions into grand stories—myths—which they were then able to use to inspire and organize others, including those who did not know one another, to all row in the same direction toward some larger goal or sense of purpose. This eventually made possible things like religion, government, law, and money. And if the myths were good ones, they could last a very long time—even thousands of years—and could be used to animate huge numbers of people to do great things, even to change the world for the better.

But eventually all myths tend to stop working quite so well. Beliefs, values, or external world circumstances inevitably change such that the myth no longer serves to get us working together as it once did. So what happens then? One option is to develop a new myth. But Judaism—which has been especially good at mythmaking—-has utilized a different strategy. Rather than rejecting the myth, Judaism tends, instead, to add a new layer to the old myth. The new layer connects the old myth to the changed circumstances. Think of it as a new user interface.

Take our most ancient and central myth: A man, Moses, climbed a holy mountain, where he encountered God, who revealed God’s instruction to him. In its earliest version, this instruction consisted of just ten commandments. But revisions to the myth over time added more commandments and, eventually, the expanded myth held that what was given to Moses at Mount Sinai was a set of books that we came to know as the Five Books of Moses, or The Torah.

In the late Second Temple and post-Destruction periods, the beliefs, values, and practices of those who had been on the margins—whom we now call “the Rabbis”—diverged so much from what the written words of the Torah described, that it became impossible for them to explain how the very newfangled Judaism that they were practicing was “authentic.” So what did they do? They revised the myth of Sinai again by expanding it even further. In their expanded myth, Moses received not only those Five Books—the “written torah”—but also an “oral torah” on Mount Sinai, a whole new corpus of additional laws and practices—or, in other tellings, a set of rules of interpretation through which new laws and practices would be developed in the post-Sinai future.

If we have reached a point today where our beliefs, values, and practices have diverged toward a breaking point with the Judaism of the Rabbis, perhaps the time has come to revise the myth once again, by expanding it yet further. The expanded Jewish myth would go something like this: God gave Moses three torahs at Mount Sinai—the written torah, the oral torah, and the svara torah—the torah of our own moral intuition, the torah that is in our hearts and minds, the torah that we know to be True in our kishkes, the torah drawn from the insights gained from our lived life experiences—and the queerer the lived life experience, the richer the insight, and the more essential it is to be brought into the tradition which so desperately needs it in order to be the liberatory enterprise it has always sought to be.

Now, one might reasonably ask whether we actually need a myth at all if we live in an age where we know that the myth is a fiction. For those who do not even believe that God literally gave Moses the written torah on Mount Sinai, how does it help to add another layer to a fairytale? The answer is the truism that a story can be True without being true. That is, its essence may describe reality even though the purported facts told in the story never actually happened in history. Myths help us see reality as it is, even though the myth itself is not factually and literally true; the compelling storytelling is what keeps us connected and rowing together. When the Rabbis added the oral torah to the myth of Sinai, the new myth now held that two torahs guided us–the written torah and the oral torah—but the reality that this myth described was that it would actually only be the oral torah that would guide us. In reality, the written torah itself was just the part of the oral tradition that got written down earlier.

When we add to the dual-torah myth that a third torah—the svara torah—was also given, we maintain continuity with the old myth, and the reality that this expanded myth describes is that it’s really only the torah of svara that guides us—or has ever really guided us. At the end of the day, it is the moral discernment of individuals and communities that is the true basis for how we are going to live our lives, individually and communally, in actual practice. And, of course, the reality is that the oral torah and the written torah were always simply the products of previous generations’ svara.

A scene from the most recent season of Shtisel, the Israeli television show that so many of us have devoured on Netflix, illustrates that this seemingly non-traditional perspective is quite traditional. Don’t worry if you haven’t seen it yet, and this won’t give anything away. In the scene, Chanina, a young ultra-Orthodox man who has been learning in yeshiva his entire life, goes to his rosh yeshiva to ask for a “da’as torah”—literally a “knowing-from-the-torah,” meaning a halakhic ruling on a difficult question, from a recognized authority, that could be trusted as reliably being “straight from the torah.” In anguish, Chanina asks if it might be permitted for his wife to have a certain medical intervention that could be considered elective but which he thinks might be necessary for her. He knows that the procedure is generally considered forbidden in his community, but he is afraid that, without it, his wife’s life could be in danger. The rosh yeshiva is empathic, compassionate, and understands the pain they are in. They debate the considerations in detail. Is she in a l’chatchila situation, a before-the-fact scenario–which would mean that they would have to accept the more stringent, prohibitory position? Or is it b’diavad, already after-the-fact, a non-ideal situation, in which case some leniency may be possible? Was it a matter of pikuach nefesh? A matter of life and death? At a certain point, the rosh yeshiva takes the young man’s hand and says warmly, “Chanina, you’ve reached the point in your learning where the torah is no longer outside of you. It is your flesh and bones. Whatever choice you make will be a da’as torah.” In other words, Chanina’s svara is torah.

And it may well have been our talmudic hero Rava on whose shoulders that rosh yeshiva in Shtisel was standing. In the Talmud, in Tractate Berakhot 6b,* there is a string of fascinating three-word aphorisms, among which is Rava’s:

Rava says, literally: “The reward of received-tradition—svara.” At first glance, one might assume that Rava is saying that the reward for learning and engaging with the received tradition is svara, that the outcome of that activity is the development of one’s moral intuition. That actually seems to match our experience of what happens when we learn and the premise on which all of our learning at SVARA is based—that the learning itself is a spiritual practice designed to shape us into deeply empathic, compassionate, courageous, crash-flex, svara-dik human beings. But based on the grammar of the other aphorisms in the passage, it appears that the more accurate interpretation of what Rava is saying is that you are rewarded for learning and engaging with the received tradition only if you bring your own (pre-existing) svara to the endeavor. In other words, you’re only “doing tradition” right if, rather than simply passively accepting it and passing it on untouched, you actually use your svara, your moral intuition, to mess with it, modify it, improve it, and then pass it on.

In the end, though, perhaps there is actually no conflict between these two interpretations at all! Rava may well be describing the svara/learning cycle that so many of us have experienced for ourselves in the bet midrash—that engaging deeply with the tradition refines our moral intuition, our svara, which we then bring back into conversation with the tradition in order to refine and improve it. And around and around.

The truth is, it’s only ever been svara. This fact is the secret knowledge of the Jewish tradition. The difference between our day and times past is that in the past very few people had access to this secret knowledge or were allowed to use it. At first, it was only the occasional prophet, then it was a small group of scribes, later it was a bigger group of Rabbis—all of whom knew that the oral torah flowed from their svara and that of previous generations. And now, we all have the potential to learn the truth—that God’s will, however one interprets that term, is discerned through the moral intuition of human beings. And when our moral intuition—our svara—is in conflict with what we have received from the prior two torahs, it is our moral intuition—that third, svara torah—the queer svara, the trans svara, the feminist svara, the Black svara, the people of color svara, the disability justice svara, the working class svara, the anti-oppression liberatory svara—that is the True torah. That is, in fact, how it’s always worked. Because God gave three torahs at Mount Sinai—the written torah, the oral torah, and the svara torah.

It’s svara all the way down.

*Dan and Benay learned this text this past week on their show, The Oral Talmud. Click here to learn it with them. It’s Episode 53.