The Jewish community has been blessed with the increased visibility of trans, intersex, non-binary, and gender non-conforming folks. 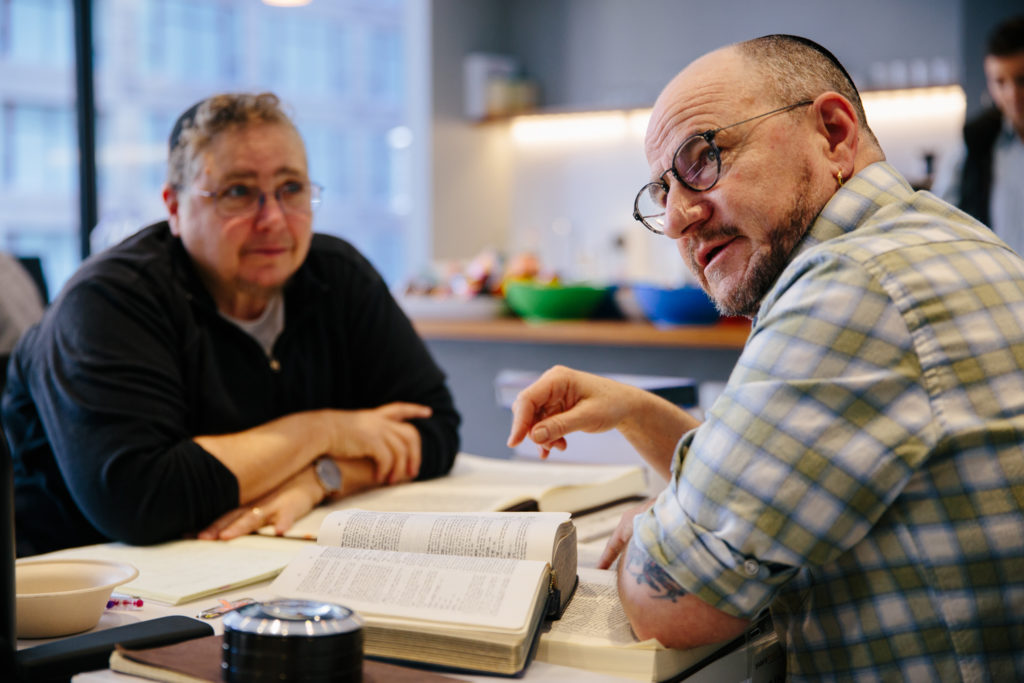 The unique lives, bodies, and experiences of this growing subset of our community demands a new halakha (pathways and practices of Jewish expression). The Trans Halakha Project seeks to empower and nourish the trans Jews whose experiences are not yet at the center of halakhic exploration.

This multidimensional project housed at SVARA has several distinct goals: We feel blessed to have the insight and guidance of our incredible Steering Committee:

Ariel Ya’akov Berry (they/them/הוא): Hello! I am currently studying at rabbinical school in New York City, and, im yirtzeh Hashem, will be a congregational rabbi one day. My passions are halakha, languages, cooking, and board game nights. I hope that I and others will be able to expand the bounds of halakha and Judaism to be more inclusive and celebratory of trans and queer Jews

Rabbi Becky Silverstein (he/him) | Co-Director: Becky believes in the power of community, Torah, and silliness in transforming the world. He strives to build a Jewish community and world that encourages and allows everyone to express their full selves. Becky is a SVARA Fellow and the chair of SVARA’s Board of Directors.

Binya Kóatz (she/they): Binya is a sefardi / ashki / moroccan / argentinean / ukranian / french trans jewish torah-lover, who writes poetry, organizes jewish community and sings and dances with her foremothers. she revels in languages, and can’t *believe* the radical gay anarchist tradition she’s been tasked with carrying forth. originally from the alte heim in Queens, she currently resides on Ohlone Land in the East Bay.

Franco Martinez (they/them): Franco is a queer non-binary Jew who calls Bay Area home and is a member of Congregation Sha’ar Zahav. Though their life is spent mostly in a theater, they somehow find the time to study Jewish texts, or texts about Jewish texts, and explore a deep rich world of ideas and seemingly opposed concepts. They are currently navigating through life without a map.”

Jamie Weisbach (he/him): Jamie believes in the power of Torah and good vegan food to change the world. Originally from Chicago, he studied Theater, English, and Religion at Bowdoin College and Torah, Talmud, and Halakhah at SVARA and the Hadar Institute. He is currently studying for rabbinic ordination as a member of Hadar’s advanced kollel. Jamie lives in New York City with his husband, Amram; their two cats, Perle and Herschel; and their ever-growing collection of books.

Laynie Soloman (they/them) | Co-Director: Laynie is SVARA’s Associate Rosh Yeshiva. They believe deeply in the power of Talmud study as a healing and liberatory spiritual practice, and they love facilitating Jewish learning that uplifts the piously irreverent, queer, and subversive spirit of rabbinic text and theology.

Olivia Devorah Tucker (they/them): Olivia fell in love with Talmud when the local Moishe House asked them to lead a Unicorn themed Shabbat. They couldn’t resist the deep dive into Judaism’s supernatural creatures and have never resurfaced – the books on Jewish myth, magic, and mysticism never make it back to the bookshelf! Olivia sees recovering our ancestral knowledge of angels, demons, dreams interpretation, and the many witchy practices peppered throughout the Talmud, both as exciting gateways to ancient texts and powerful lenses for viewing and healing the world in unconventional ways. A lifelong Pittsburgher (Shawnee land), they take part in vibrant theatre and leftist Jewish organizing, play tabletop role-playing games, collect queer sci-fi comic books, and bake challah inspired by the weekly Torah portion (“All Challahs Are Beautiful”). They always have their eye out for a machmir Bechdel-Wallace Test pass, especially when it comes to Talmud. Olivia puts trans in translation and the femme in ephemera. Stay hydrated!

Ren Finkel (they/them) | Program Coordinator: Ren is a multimedia artist, community organizer, and student at the Reconstructionist Rabbinical College in Philadelphia. They’re in a long distance relationship with Pittsburgh, where they majored in Photojournalism, first learned about anti-capitalism, and were brought back to Jewish practice. They are deeply committed to healing work and restorative justice. After a summer at Queer Talmud Camp, studying ancestral Jewish text has become the heart of their spiritual practice. They tend to study Talmud with a 2:1 ratio of respect to irreverence. In their spare time they like to make Sefaria source sheets, specifically about how gay certain Talmudic Rabbis are, specifically Rabbi Yochanan and Reish Lakish—and all they need is one line of Berakhot to prove that Rabbi Gamliel was a twink who believed in disability justice. They are incredibly excited to be working on the Mishna Collective, and hope that the text may provide us with a semblance of sense and solace in such uncertain times.

Xava De Cordova (she/her): Xava is a disabled, Sefradi, Mizraxi trans woman and co-host of the world’s first Queer Talmud podcast, “Xai, how are you?”. She is a long-time SVARA-style Talmud learner and SVARA teaching kollel fellow who got her start as a teacher by creating Beit Midrash Behind Bars, an organization that facilitated Jewish learning opportunities for incarcerated people in Washington State. She is also the co-founder of Shel Maala, an online-first queer yeshiva , which she co-founded SVARA fellow with Binya Koatz. She lives in Providence, RI, where she regularly produces Jewish ritual theatre (or did, before the pandemic) and does her best to steward the radical tradition she’s been blessed to inherit.

Applications for the Teshuva-Writing Collective have closed.

SVARA’s Trans Halakha Project is assembling a collective of 10-12 trans writers and researchers who are working on authoring (individually or collectively) teshuvot that use the language of halakha to respond to questions about Jewish life and practice that emerge directly from trans people.

In 2022, we will be addressing she’elot (halakhic questions) related to *milah* (circumcision), *niddah* (practices that center menstruation), or another topic that members choose. We strongly encourage applications both from folks who have already begun or done substantial work related to one of these topics, as well as folks who are in the earlier stages of research and writing. Members of the Teshuva-Writing Collective will receive an opt-in $1000 stipend.

The Trans Halakha Project seeks to curate existing and developing resources that have been created for trans Jews, by trans Jews and engage trans & non-binary people in the creation of specific rituals and blessings.  This work will be organized in two buckets:

Trans and nonbinary members of our community are welcome to submit ideas for rituals and blessings, already crafted rituals/blessings, and express interest in further supporting the project here. Submissions will close in mid-September and we’ll be releasing the booklet and compendium in mid-December! We also hope to share out the teshuvot towards the end of 2022.

Join us on January 24th for “Forging Our Own Path”!